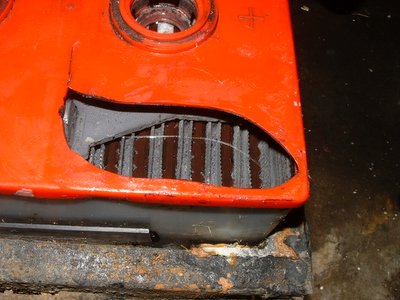 After driving for about 3 miles in the rain there was a loud bang sound from directly under my seat. This was very alarming but I decided to keep going because there was nothing I could do. The damage was already done.

I think acid had formed a thin conductive film on the surface of the last cell in the pack and when water splashed up it ignited the Hydrogen gas trapped in the cell during charging.

Later at work I decided not to feel for damage due to the risk of death by electric shock and acid burns.

At the weekend I went to the Landrover Sortout and bought 4 used trolley jacks. When I got home I used the jacks to lower the 1 Ton battery pack to the ground. 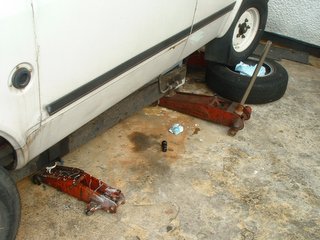 I had feared several monoblocks had blown their tops but as far as I can see only the end cell had its top blown off.

I found the broken pieces on top of other batteries in the 36 battery pack.

After sucking the hydrogen out with a wet and dry Hoover I used a glue gun and a paint stripping hot air gun to refit the broken pieces of plastic. The reflowing idea with the hot air gun was a bit stupid because in my haste I overheated the glue and the piece of broken plastic that I had spent some time carefully cleaning and positioning dropped down about 2mm. I decided not to try and re-position it.

The inside of the cell looks quite interesting. I took a picture of the complete assembly before refitting it. 28-OCT-2005 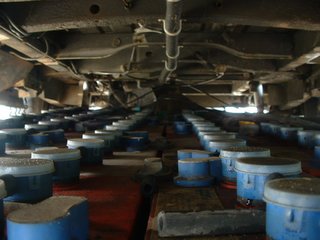 That night I recharged the batteries as usual and set off. It started to rain again and I started to feel very uneasy. The window started to steam up and so I decided to turn on the heater (which had not been used in anger) Just as I pulled away at the lights there was another bang from underneath the van which I felt through the floor! I thought oh dear! I decided to stop at the top of the hill but could see nothing unusual underneath. Anyway the rest of the days driving was uneventful.

When I got to work I decided the only way to eliminate the risk of ignition in a cell was to fit a small vacuum pump to suck the hydrogen out. The pump should run all the time the power was on. In the mean time I decided to use the Hoover to suck out the gas each morning before setting off.

Later I had a look at the top of the originally damaged cell expecting to see a large hole but it was still intact! I am beginning to wonder if the second bang was a backfire from the diesel heater which had gone off mysteriously due to water in the fuel or air bubbles. On reflection I think I tried to relight the heater too early and it ignited unburnt oil vapour in the combustion chamber and exhaust pipe.

Nice untitled post! Thanks for intesting info! More Bedford can be found at http://www.auto-portal.us/