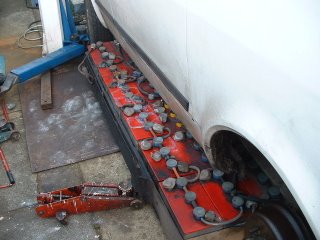 27 Jan 2007 At Christmas the van Broke down and a puff of steam came out of the battery vent hose!
The AA man offered to replace the battery but I had to explain it was 216V and weighed 1000kg! Ah he said.
After careful searching I decided to buy three Enersys 200Ah 6V monoblocks. Model 6TP200,
After several days struggling with inadequate lifting gear, I managed to remove the defective 6V unit and connect the new battery. The new battery will not fit in the old space so it was mounted via cables in the door step. This is useful however because it allows me to monitor the new battery and also try out other battery types for endurance. The defect in the old battery seems to be a short between positive and negative plates.
Posted by Chris B at 12:31 am

Nice untitled post! Thanks for intesting info! More Bedford can be found at http://www.auto-portal.us/

Hi,I have only just seen your blog about the CF electric. I have two of these vans and a fair amount of experience with using them and have had problems similar to yours with the battery. Most of the battery problems arise when the battery is not topped up with distilled water correctly.Ideally an "Autofill" is required for this and was supplied with the vehicles when they were sold.I don't want to tell you how to suck eggs as you already seem to know a fair amount about these fascinating vehicles but if you want to discuss problems and possibly swap spares contact me as below.

Sorry for the delay in responding.
Ideally I would have an auto fill system but cannot afford one right now. One of the reasons for using the EV is lower cost. I blew last years budget on 4 new batteries.
The long term problem is the EV5T Chloride batteries. They are wearing out at about 1 per year.
I revised the blog recently and put in a bit about using a vacuum pump to fill the batteries.
The van gets an average of 23 miles per day use.
What condition are your CFs in?
Mine was previously used as a shead!